WOUND AND SURGICAL SITE INFECTIONS IN THE MODERN VETERINARY CLINIC: PREVENTION AND TREATMENT

This theme addressed problems and questions we all encounter in everyday veterinary practice. Surgical site infections (SSI) are a nuisance for anyone and cause high costs as well as stress for the vet, the owner and the animal. Therefore, it is of paramount importance to prevent SSI. Surgical site and wound infections are caused by bacteria, and infections are prevented and treated with antibiotics… or are they?
We live in a world where resistant bacteria cause increasing problems. Researchers and clinicians thus need to address this problem and strive to reduce SSI and wound infections as well as the use of antibiotics. It has become increasingly clear that there are no straightforward answers to these issues, and many questions remain open: Do antibiotics prevent or increase SSI rates? When are bacteria a problem in open wounds? When do we need to provide antibiotics, and which alternative strategies do we have available? What is the role of NPWT, pH, honey and laser treatment?
At the end of the afternoon we have celebrated the 25th anniversary of the VWHA. The founding VWHA council has presented the developments in various fields related to wounds over the past 25 years. Thereafter they have been announced as honorary members, together with 2 former council members who have done a lot for VWHA.
On Tuesday May 24th we had organized a short communication session in which 9 very interesting abstracts from different countries were presented on a variety of subjects. Additionally, we have set up the first Equine Wound Centre session. The Equine Wound Centre project is a new initiative to create a network of wound centres, to allow access to specialized wound treatment for each patient, each owner in each country and to create a base for discussion, collaboration and knowledge sharing, stimulating the interest and level of wound management. Several participants had come especially for this session.

For those who did not participate the proceedings and presentations are available at the members section.

The Conference was a great success: the attendance was great, the theme was very actual and appreciated by the participants, and the atmosphere was superb. Sponsors had their stands in the same room, which resulted in a vivid interaction between companies and the audience during the breaks.

We had 19 speakers, from 12 countries, lively panel discussions and lot of interaction with the audience. 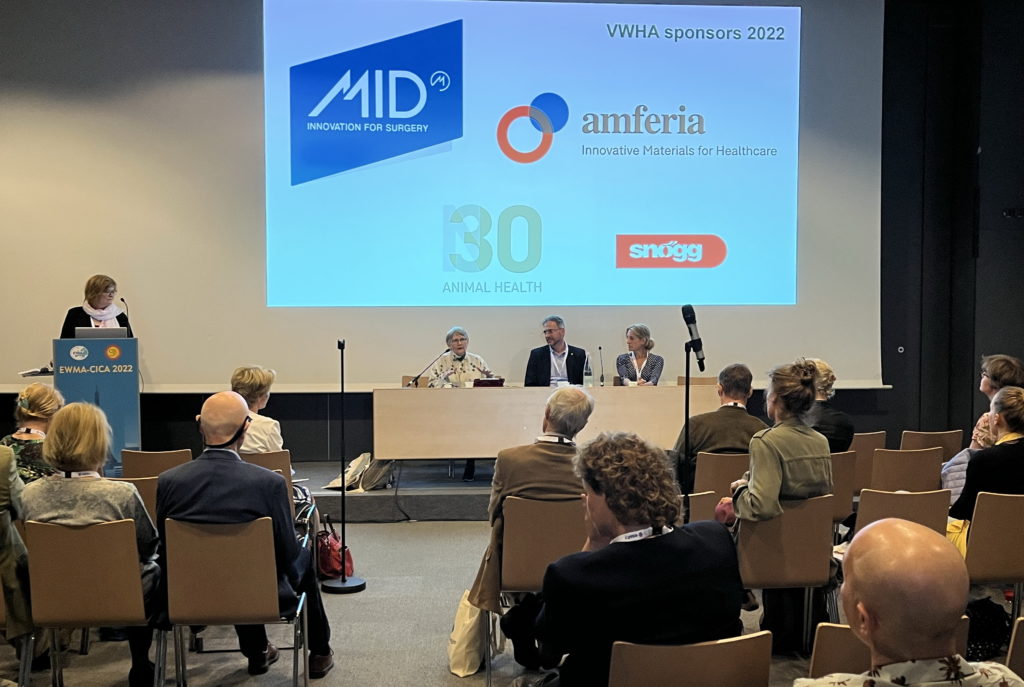 Despite the serious subjects we had also much fun! There was only one problem: the presentation of Derek Knottenbelt could not be loaded, but of course he was able to fill his time fluently. His presentation is now available in the members section.

Dylan Gorvy with his new hairstyle 😉

The celebration was continued in the evening in a nice restaurant.